ASTi provides the simulated communications and environmental cues for the U.S. Army's Aviation Combined Arms Tactical Trainer - Aviation (AVCATT-A) Reconfigurable Manned Simulator. The AVCATT-A suite integrates multiple participants into a single simulated battlespace on a mobile platform. Each suite of trainers will reside in two trailers so that it can be transported to the location of the training requirement. AVCATT-A operates in stand-alone mode or may be networked via LAN or WAN with other training devices, such as the Close Combat Tactical Trainer (CCTT).

The AVCATT-A training suite is made up of the following stations: 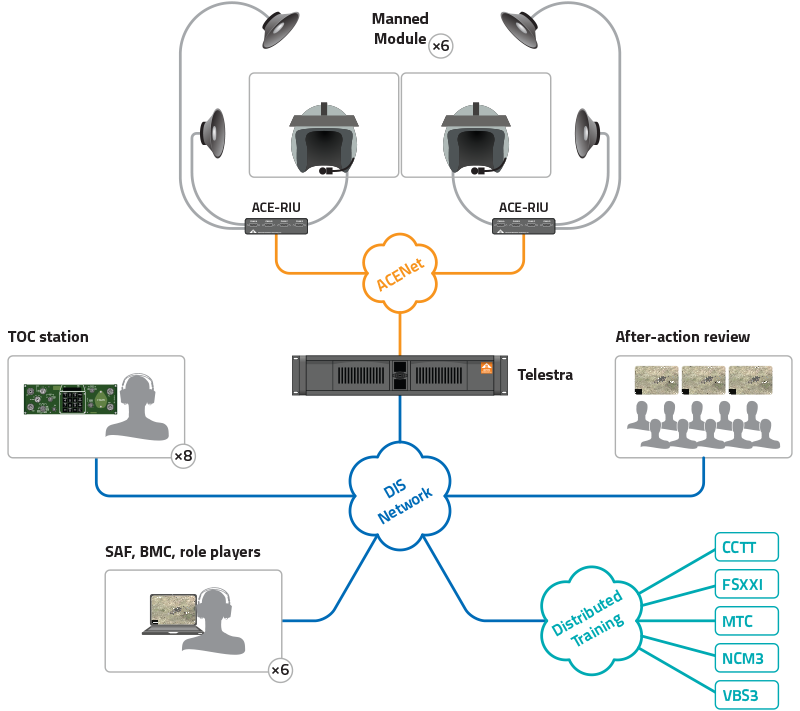 The Manned Modules are the heart of this training device, and are made up of generic flight controls and a glass cockpit that can be configured to simulate any one of the following five aircraft types:

Each cockpit may be configured independently of the others from a remote host across the network. Each aircraft simulation includes the radio assets, navigational aids, etc. that are applicable to the specific platform. The Manned Modules support a wide variety of simulated missions such as troop deployment, search and rescue or attack/battlefield support.

In addition to simulating communications, the Manned Modules have environmental cue modeling. Engines, rotors, aero noise, weapons and explosions are all accurately simulated for each aircraft type. The aural cues are sent directly to the operator headsets and to a seat shaker in the cockpit. 3-D positioning of the sounds in the headset fully immerses the operator into the aural environment.

The BMC, SAF and Role Player stations support the training mission by monitoring multiple communications channels and acting as both friendly and enemy forces. The SAF and Role Players are directed by the BMC to act as additional air or ground assets. For example, a Role Player may act as a downed pilot emitting a Personnel Locator System (PLS) beacon. Additionally, the BMC has an override intercom which permits communications with any exercise participant at any time during a training exercise.

The TOC station operators provide a Command and Control element to the training mission. These company and brigade- level commanders use ASTi's simulated SINCGARS radio panel to communicate with the other exercise participants.

The AAR station uses a separate record platform to capture all of the headset audio from the Manned Modules. This platform can record 12 audio streams' audio while monitoring "live" audio or playing back prerecorded audio files.

The simulation of the encryption devices includes all of the associated cryptographic tones such as preambles and postambles. The IDM passes actual data from a local host computer to a remote host through the simulated radios in the trainer. A Terrain Server is used at every station to enhance the already rich radio propagation environment. The radios also produce a user-specified tone to simulate the effects of jamming.