In modern day, it would be hard to find anyone who has not heard a stereo recording of some kind, and the ability for a well executed recording to provide a sense of width and position for the performers is taken for granted. However, the mechanism used to impart directionality to such a recording is actually the reason that virtually every current surround sound system can be shown to be deficient.

There is a simple experiment that will help us understand the preceding statement; pick a well recorded modern studio produced recording with good stereo positioning and play this over your preferred stereo system through a decent pair of loudspeakers. Now turn your chair 90 degrees – if you believe you can still determine directionality then you just proved you are from another planet: human hearing just cannot do this. (ASTi is happy to provide references to the staid and horribly rigorous research papers to back this statement up).

Nearly every stereo recording we hear is produced using a mixing technique known as pair–wise mixing. The fundamental principal for pair–wise mixing is to adjust the gain of each signal fed to each of the two channels, such that when the signal has equal gain in each channel the sound will be equally positioned between both speakers, and a gain 1.0 in one channel and 0.0 in the other will result in the sound appearing as a point source from the left or right depending which channel carries the full gain channel.

It should also be noted that “stereo” recordings only work “correctly” with the replay loudspeakers positioned to form a 60-degree equilateral triangle from the listening position – if the speakers are further apart then the replay will suffer a “hole-in-the-middle” effect, where no sound appears to come from the central portion of the soundfield. 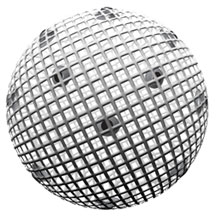 The reason stereo works for frontal sound fields is that the human brain is very much a majority voting mechanism, and without the other cue sources that our brain is used to processing, it will accept the limited stereo signal information as valid data and create the most complete image available. While this is true for frontal sound fields, the human mechanisms used for 360 degree sound localization are many and complex through the full sphere, and not appropriate for full discussion in a release note such as this – the reader is encouraged to research this themselves for full satisfaction, or failing this, to contact ASTi for a guided tour of further reading.

Beyond Stereo, Quadraphonics, 5.1 Surround and More

Many of us have home theater surround-capable receivers at home, supporting Digital Dolby AC3–based and DTS 5.1 (or 6.1) surround sound, and it is easy to assume this technology represents the state–of–the–art. However, the truth is rather disappointing. Both of these formats are directly lifted from the cinema systems they were developed for, with Digital Dolby being encoded between the sprockets of the 35mm film, while DTS is implemented using a time–synched CD–ROM stack. Note that both formats were introduced during the early 90’s.

The problem with these formats is not so much the decoding of the signals, but the content of the signals. A 5.1 format system has the following signals; left front, right front, center, rear left, and rear right, plus a low frequency effects (LFE) channel (used to drive a subwoofer). The issue with these formats is that, to date, every commercial release has used a form of pair-wise panning to impart directionality. So a sound that is supposed to come from the left side is achieved by adjusting the gain of the signal sent to the left front and left rear speaker. The same is true for any sound and directionality required, and as we have already noted, pair-wised panned sounds do not provide directional cues beyond the true 60-degree arc directly in front of the listener. The other problem with such systems is that directionality (when it does make sense) is only meaningful when the listener is correctly oriented relative to the relay system axis. Once the listener turns his head, all accuracy related to directionality is destroyed.

The fundamental problem with these systems is that they are essentially a derivation from the ill-fated quadraphonic systems that were marketed as the “next great thing” in the mid-70’s, following on from the introduction of stereo in the mid-60’s. The real problem with quadraphonic systems was that sound quality and meaningful reproduction of real sound was basically disregarded in favor of the potential to sell twice as much equipment as needed for a stereo! The 90 degree angular spacing intended for quadraphonic reproduction was destined to result in a dramatic “hole-in-the-middle” imaging even for the forward center imaging, so it was never likely to be satisfactory for high fidelity music reproduction.

It does not matter that the basis for the surround sound positioning is fundamentally flawed. The vast majority of the population has been “trained” that the current solution is the best that can be achieved.

At the heart of surround sound is a fundamental issue: what to encode? All conventional surround systems (mono, stereo, quadraphonic, Digital Dolby 5.1, etc) encode channel audio. In other words the format of the output configuration is coded into the signal itself. While this may seem obvious (after all why not encode a stereo signal using 2-channels, its all you need right?), there are other approaches.

What if the encoding of the signal simply described the directionality of the source signals? If we have some signal format that allows this to occur, then it is possible to disconnect the encoding of the signal from the exact configuration used to replay the signals; the decoder now assumes the role of determining how the source signals are delivered to the reproduction system. Under this scheme the content provider does not have to concern themselves with the number of channels the recipient of the signal is equipped to handle, providing the decoder knows how to translate the encoded signal appropriately.

There are great advantages in taking the approach of encoding the source signals, since this by implication makes no assumption regarding the orientation of the listener within the system, the only assumption is that there is some coordinate reference shared and understood by the encode/decode systems.

The other advantage to encoding the source signal is that there is no implicit restriction on horizontal-only directionality (per stereo, Digital Dolby 5.1, etc), and full 360 degree sound may be possible.